PengoRoyale is now finally available (what do you want for a side-project). Grab it on STEAM!. And, Merry Christmas... it's 100% FREE! Grab it today. 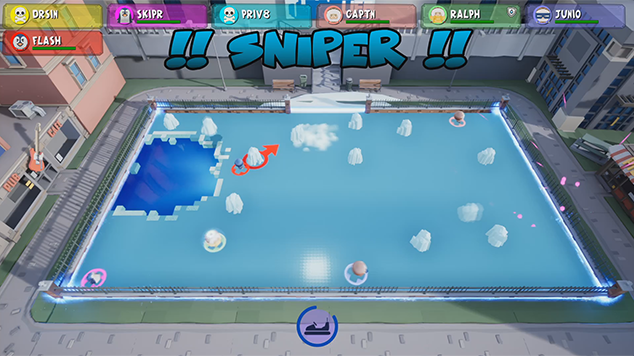 Thanks for Checking out PengoRoyale.

PengoRoyale started, as a lot of my side-projects do, me thinking about how to take an arcade game of my youth and infuse it with today's gameplay mechanics. In this case, I was enjoying one of the retro arcades here in New Jersey, The Morristown Game Vault. There I was rocking one of my favorite 80's games:

Pengo was one of the "next"-gen Pacman style games that brought us DigDug or Mr Do and I played the heck out it. Well there I was playing it and it hit me, man wouldn't the "kick the block" mechanic work great in a similar fashion to the bombs in Bomberman?

And right about that time, my friend Lee Perry, started posting about his cool new experiments in 8 and 10 player couch games. It was like a light bulb. Massively Local Player.. check.. PubG style last man standing.. check.. cute as heck Penguins and Eskimos.. check check. Peanut-butter meet Chocolate?" You Betcha!

BOOM. I started playing around and PengoRoyale was born.

So now, after about 100 hours or so of development time later, y'all get to play my creation. A total 80's mashup of brawlers, boomers and cute to boot! I really hope you like! And since it is a tech demo, I'm releasing it for free so that everyone can enjoy.

If you have stand-up arcade publishing experience, please reach out to me!

I loved putting this trailer together as it tells a story and shows some nice in-game action.

I hope you enjoy it.

Behold, the meat of the game. PengoRoyale provides a full BattleRoyale experience with games lasting about one minute. Check out why PengoRoyale is insane!

PengoRoyale is available right now on STEAM!. And, as a gift for surviving the pandemic, it's 100% FREE! Grab it today.

So the thing with my AssetPackGames label, is it's a one man show. I'm awesome at a lot of things, but there are still things I needed to buy. Sure I can code, and I can create art, sounds or levels, but I'm not the best 3D modeler and can't make materials or particles to save my life. So here is where I talk about the asset packs and purchased content that I used to make PengoRoyale.

Ok this is cheating since I wrote it, but it's on the UE4 Marketplace. Also, I can't help but to send a shout-out to the Socke and his Simple Controller Plugin. While it wasn't a right fit for me, his idea to implement SDL2 in UE4 sparked me to write my own implementation.

3DRT - Eskimo vs Penguins by 3DRT.com.

This pack is our main character set. Honestly, there wasn't a HUGE amount of cartoon penguins to choose from so I made it work. It's not a bad set given it's low poly nature but it does have some skinning issues in UE4. Overall I'm happy with the choice.

This was another CGTrader find so I figured I'd cover it quick. When I decided to go with the Mario-style powerups, I grabbed this one for my base crate (it's a BP with 2 meshes in game). Good for what it is.

Now on to Epic Marketplace Packs...

Several of the Simple and Polygon packs from Syntry Studios.

To be fair, Syntry Studios has probably the most used packs out there. These folks make some of the cleanest, best art there is and there is a huge variety of packs to choose from. I'm using a bunch of them including the Viking Pack, Villages plus many more. Seriously, buy everything Synty makes.

Here's the deal... all of these packs are good and worth the money. I don't go in to details because I only used a little bit of content from each of them and besides, I'm tired of writing HTML. You should check them out though.

Another Stylized Material Collection 2 by Another Easy Chapter

And of course the music from Melody Loops...

Melody Loops is my go-to source for inexpensive game music. Tons of content and no they aren't paying me -- so check them out.

I should also point out there are probably sounds from FreeSounds.org. FreeSound is another one of those amazing sources of content for indie devs. If you don't have an account there.. go get one!

Finally, I might have missed something. If I did, I appologize. Just reach out and I'll add you.